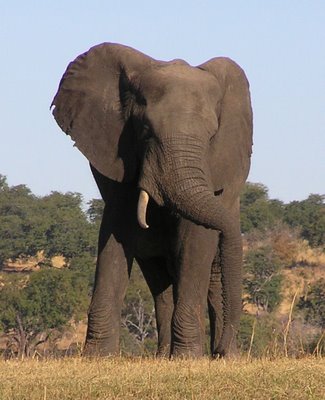 This article mentions both of the communal conservancies we visited in the Caprivi: Kasika and Salambala.

Part 2 of a two-part series

IN Namibia's north-eastern Caprivi Strip, where Angola, Botswana, Zambia and Zimbabwe all meet, there are thousands of elephants crossing borders at any given time.

In northern Botswana alone there are an estimated 100 000-plus elephants growing at a rate of five per cent a year, and are damaging the vegetation in protected areas such as Chobe National Park at a record pace.

Elephant numbers in this part of southern Africa far exceed the population in Kruger (South Africa) and are also causing huge headaches for wildlife management and local people.

"There are definitely too many elephants here and they are causing a considerable amount of damage to farmers' crops and even people," said Beaven Mulani, a field co-ordinator with the WWF-funded Integrated Rural Development and Nature Conservation (IRDNC) in the Caprivi, which is experiencing a rise in elephant-human conflict.

Beaven's grandmother was killed by an elephant when he was only five-years old and the issue is close to home.

"Something like culling would destroy a lot of elephants," he said.

"If we are talking about conservation we need to find the right balance.

We must look at the needs of the communities.

The only solution here is to give hunting quotas to the conservancies.

"This will give the communities more control in managing wildlife."

Conservancies are a unique conservation system in Namibia that give local communities responsibility and right of ownership over their natural resources and wildlife.

Registered conservancies acquire the rights to sustainable wildlife hunting quotas set by the country's Ministry of Environment and Tourism.

Wildlife, including small numbers of elephants, can either be hunted and consumed by the community, or sold to trophy hunting companies, with proceeds going directly to the communities.

"Communities once received nothing for the use of their resources, now they are getting paid for it," said Chris Weaver, Director of WWF Namibia.

"You can do a lot with the money, like improving education, increasing employment, and of course, sustainably managing natural resources.

The idea is for local communities to manage the land, wildlife and natural resources so that they are profitable, and ultimately, self-supporting."

In the nearby Kasika Conservancy, there are quotas for four elephants, six buffaloes, two hippos and two crocodiles.

"Community attitudes towards wildlife conservation have changed since the establishment of conservancies in my region," explained Chief Joseph Tembwe Mayuni, Chief of the Mafwe tribe, which lives in the Mayuni Conservancy in Caprivi.

"As my people see that benefits are going directly to the community, they know it is in their interest to look after wildlife."

RED HOT Although communities in Namibia have become more tolerant of wildlife as a result of the conservancies, it doesn't mean that the human-wildlife conflict has gone away.

Children in the Impalila Conservancy near the border with Botswana are often too frightened to go to school because elephant herds are in the area.

As a result, many children's education has suffered.

Sometimes the conflict ends in tragedy.

At the Kasika Conservancy in recent years, five people have died from wildlife attacks - three from hippos, one from a crocodile, and one from an encounter with an elephant.

About 1 600 elephants come across the border from Botswana's Chobe National Park each year from June to November to graze on the lands of the Kasika Conservancy.

Elephants are also among the main culprits behind crop raiding, easily damaging a farmer's yearly income in a matter of minutes.

"My field has been raided several times," said Moses Maseku from the village of Sikaunga.

"This is a problem, especially as I have no other income and I get no compensation.

When one elephant comes, more are sure to follow.

I am expecting more raids.

There is nothing I can do."

Elephants are not just big, but smart.

They can easily knock down fences protecting crops, even disable electric ones, and are not scared of loud noises made by farmers defending their crops.

But it seems that they have one weak spot - they don't like spicy food.

Chilli peppers have shown to be an effective elephant deterrent in Namibia, as well as other parts of Africa experiencing elephant problems.

Either mixed with engine oil on rope barriers around the fields or mixed with dried elephant dung and burned to make 'chilli bombs', the spicy capsicum seems to work as an effective anti-elephant repellent.

Albert Stenzi, another farmer from Sikaunga, has seen his sorghum fields raided five times in one year.

"I am going to try and use chilli techniques if I am given the chance," he said.

"I will try anything at this point to stop the raid."

Through a WWF-supported project, several conservancies are now learning to cultivate several plots of chillies to be used for scaring off elephants that raid their crops.

"The success in reducing crop-raiding and increasing crop yields has made people more enthusiastic and supportive of conservation, and has demonstrated that people can live alongside wildlife while developing sustainable livelihoods.

And that in turn should help ensure a long future for the elephants."

Mark Schulman is Managing Editor at WWF International, based in Switzerland.

Africa Namibia hunting safari
Posted by Becky McCray at 9:17 AM